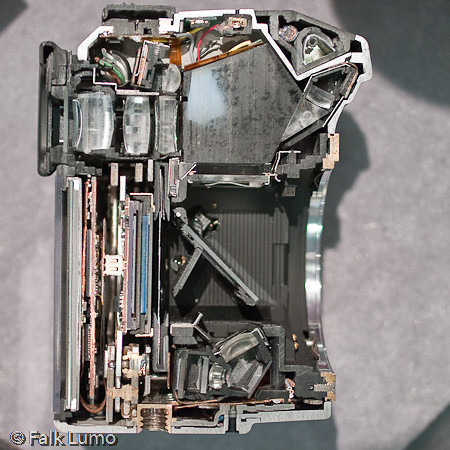 
The Photokina 2010 has just closed its doors and I am compiling my findings regarding Pentax into this article. I posted my first impressions a week ago. The most exciting part (besides trying out the 645D) certainly was to find out about the new K-5 camera. I gathered a lot of material from various sources and wrote a full Pentax K-5 hands-on preview report. A short blog article turned out to be the wrong format and therefore, I posted it on my website. Here you go:


-> Pentax K-5 hands-on preview
Don't miss the exciting news. Moreover, I tried to answer as many questions I received as possible in the report and to skip as much redundant info as possible too.

However, a small number of questions didn't fit the K-5 context so I am putting them here:

The new DA 35/2.4 introduced short before Photokina is specified here:
The production capacity is 2/3 of that of the 18-135 lens and will be available as a kit lens for the K-5. Early reports about the 35/2.4 have been very positive (sharpness wide open, bokeh, very fast focussing, maybe 35mm image circle) and as a kit, may have a very attractive pricing.
The kit will be black only and non-black versions are said to be unavailable (at least outside Japan).

This lens was announced together with the K-5 at Photokina and is specified here:
The lens was received with much interest and will be offered as a kit lens for the K-5 too. A number of features I could clarify:

Pentax showed its 1.4x autofocus teleconverter at Photokina 2 years ago. It has disappeared. I asked what happened to it. The response I obtained was hard to accept: Pentax Germany requests production of the teleconverter but Japan denies saying that teleconverters aren't required anymore in the digital age. Pentax Germany tried to explain that a digital magnification may actually have a negative impact on image quality (as we all know) but obviously it did not help much. What shall I say...?

Overall, Pentax is a bold performer in 2010: 645D, K-5 and K-r seem to be 3 winners. And the company itself is making profit. So what else should it take to make a Pentaxian a happy Pentaxian? Not much should one think. Esp. as an Olympus E-5 (good-bye gift?), Canon 60D (downgrade?) and Nikon D7000 (Pentax clone?) are not particularly exciting. But the grass never is green enough ;)

It's because many Pentaxians are addicted to their hobby. They want to invest further in their system and are imaginative enough to foresee "their" camera and lenses in one or two years time.

Therefore, it's a bit irritating that all signs emanating from Pentax at Photokina (foremost but not only from Pentax Germany staff) cry out: we're not going upstream with the K mount. Not now. The 645D digital medium format is as professional as one may actually desire. "Unfortunately" however, cameras in the tradition of the *istD or the higher end film bodies attracted quite a few rather professional photographers into Pentax. Over the last couple years, their fraction is shrinking though and this Photokina won't halt it. It's no fortunate coincidence either that no new Star-lenses are announced and FA Ltds. are tagged "end of life" (whatever that means...) in Germany. Personally, I also don't expect a revival of non-standard lenses (like 85/1.4, 135/1.8, 300/2.8, 600/4, maybe not even a 400/5.6), based on a statement that the rarer lenses aren't currently profitable for Pentax to make. And I hear a bold "no" to full frame. Pentax doesn't see their enthusiast user base go full frame.

To be fair, nobody knows about the future prospect of mirrored cameras. On the other hand, Pentax seems still to be in an evaluation phase with respect to mirrorless cameras and meanwhile anticipates to sell the K-r against mirrorless cameras from other vendors. This worked out fine in the past (with the K-x) but Pentax may start to realize that this won't continue for too long. So, it may be understandable that in this atmosphere of change, Pentax may not invest in the $1500+ segment in order to re-establish their share in that market segment. On the other hand, Pentax learns that what was the $1500 segment (K-7, D300) now is the $1200 segment (D7000) and soon will be in a region with aggressive price competition. As will be mirrorless cameras.

So, some kind of either upstream or innovation strategy was expected and missed from Pentax at this year's Photokina. That's the one complaint. But I hear it from many, from Pentaxians and all over the press watching the market: "where is Pentax heading?".

As a side note, there has been staff from Hoya visiting Pentax and Photokina. E.g., Ned Bunnell was spotted at Photokina and Eguchi Kazumichi (head of marketing imaging systems division) gave an interview. So, if anybody (not me) had a chance to meet with Hoya Int'l management at Photokina and exchange some ideas, please drop a comment... ;) P.S.
I activated some ads on my blog. It enables a certain guy to pay reparations:) (just joking!)